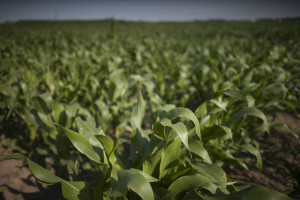 A synthetic corn population, referred to as the Wisconsin Quality Synthetic (WQS), has been developed by the UW corn breeding program over the past fifteen years to have high-quality stover and high forage yield. Briefly, WQS is a broad-based synthetic with a maturity of approximately 100 to 110RM. As a silage, WQS was selected to have low neutral detergent fiber (NDF), high in vitro true digestibility (IVTD), and high in vitro NDF digestibility (IVNDFD). It is approximately 50% Lancaster background (H99 and Mo17) and 50% broad-based high-quality germplasm from northern temperate regions. Inbreds derived from WQS combine well with inbreds derived from the Stiff Stalk Synthetic.

The Germplasm Enhancement of Maize (GEM) project at Iowa State University developed breeding populations CUBA164:S1517 and CUBA117:S1520 that hold promise for high yield and good nutritional quality as a silage. Furthermore, both populations are from the Stiff Stalk Synthetic background (75%) and complement the heterotic pattern of WQS. Selected families from CUBA164:S1517 and CUBA117:S1520 were intermated to form the base population from which the GEM Quality Synthetic (GQS). Selection in GQS involves the same breeding procedure as for WQS, except that inbreds from the Lancaster heterotic group will be used as testers for GQS. Inbreds derived from GQS should combine well with inbreds derived from WQS.

The Wisconsin Grazing Composite (WGRCOMP) is an open-pollinated population of corn that has unique potential as a forage because it contains two genes conditioning nutritional quality and regrowth after cutting. WGRCOMP C2 has been developed by the UW corn breeding program over the past seven years to have high-quality stover and forage regrowth potential. WGRCOMP C2 is a narrow-based population developed from a three-line synthetic (W64A, W182BN, W117) with a maturity of approximately 90RM. It is homozygous for two genes, brown midrib3 ( bm3 ) and grassy tillers1 ( gt1 ). The bm3 gene is a low-lignin gene that elevates fiber digestibility. The gt1 gene increases the number of tillers produced by each plant, and thereby allows regrowth after cutting.