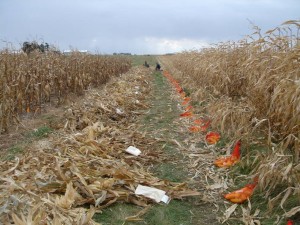 The WQS and GQS synthetics are continuously improved using a testcross breeding method, and inbreds derived from succeeding cycles of improvement are developed to the S6 stage and released (Figure 1). Population improvement and inbred development occur simultaneously.

S1 families derived from each new cycle of WQS and GQS are initially screened for general agronomic acceptability in a high-density (32,000 plants/acre) replicated trial at the UW West Madison Agricultural Experiment station. The same S1 families undergoing the stress evaluation are also self pollinated in the inbred nursery at the West Madison station. Approximately one-half to two-thirds of the S1 families are discarded based on the stress trial. S2 families descended from the selected S1s are crossed during the following season to appropriate commercial inbreds such as LH244 (WQS) or, in the case of GQS, advanced lines from WQS such as W604S. The crosses are evaluated at two locations (Madison and Arlington) the following summer. Evaluations use standard field plot techniques for silage hybrids to estimate forage yield and quality. Nutritional quality is based on whole-plant NDF, IVTD, IVNDFD, protein, and starch (see Analytics). After the fall harvest, 20 S2 families are selected based on a milk-production index (MILK2000) that includes both silage yield and quality. These 20 families are recombined by intercrossing (bulk-entry method) to form the next cycle of WQS or GQS, which will again undergo S2 topcross selection.

During the season when the S2 crosses are being made, all S2 families are self-pollinated to create S3 families (Figure 1). These S3 families are also be self pollinated during the summer evaluation of S2 crosses so that after the best S2 families are selected, S3 and S4 derivatives are immediately available. These are crossed to at least two appropriate testers in the winter nursery for evaluation during the following summer. Sites for evaluation will be chosen based on maturity and resources available. S5 and S6 lines are also developed while the S4 families are being crossed and evaluated. Using this breeding method, superior S6 lines are identified after the sixth season. One additional season is used to increase seed of any released lines and to produce large quantities of seed of hybrids demonstrating the potential of the released inbreds.